Toledo Bend Lake stretches for miles along the Sabine River as the largest man-made lake in the south, forming part of the boundary between the states of Texas and Louisiana.

Visitors to Toledo Bend are attracted by boating, fishing, skiing, camping, hiking, golfing and other recreational activities in the area.

RV resorts, campgrounds, resorts, restaurants, marinas, and motels are all available along the 1,200 miles of shoreline of the reservoir.

Bassmaster Magazine has repeatedly selected Toledo Bend Reservoir as the one of top sport fisheries in the United States.

This massive 181,600 acre lake is a project of the States of Texas and Louisiana, and has both recreational and power generation benefits. It has a maximum depth of 110 feet.

The lake extends 65 miles to the north to near Logansport, LA.

Toledo Bend Reservoir stretches for miles along the Texas and Louisiana border, directly west of Many, Louisiana.

While largemouth black bass fishing remains the most popular on Toledo Bend, many other species are regularly caught, including crappie, bream, white bass, striper bass and catfish.

Toledo Bend Reservoir attracts numerous large fishing tournaments year-round because of the excellent fishing and the facilities available for such angling events.

Bassmaster Magazine has selected Toledo Bend Reservoir as the top fishery in the United States. Toledo Bend ranked above 230 potential lakes after the magazine conducted research and personal interviews with anglers from around the U.S.

Toledo Bend was the location for several of the Bassmaster Elite Series.

Many marinas offer fishing piers and launching ramps; in addition, public launching ramps are available on both the Texas and the Louisiana sides of the reservoir.

Residents of Texas or Louisiana who are licensed in their state (or are exempt because of age), or persons who hold valid non-resident fishing licenses issued by either state may fish in any portion of the lakes and rivers forming a common boundary between Louisiana and Texas inland from a line across Sabine Pass between Texas Point and Louisiana Point.

In the lower part of the reservoir the water is typically clear; gamefish are usually found around vegetation edges, flats, humps, and creek channels.

In the upper third of the reservoir, the abundance of vegetation typically declines.

There are many activities to keep Toledo Bend residents, and visitors, busy around the reservoir and its environs! But sometimes we want to get away from the lake for an afternoon, or a weekend.

We like to check out the restaurants in Many, or Alexandria, or even drive west over to Tyler, do some shopping, and explore the back roads of East Texas.

Read more about the lakes of East Texas.

Located on Toledo Bend Reservoir, one of the country's largest man-made reservoirs, North Toledo Bend State Park provides a venue for a wide variety of water-related activities in a pleasant environment.

And for land-based activities, more than 900 acres are available for camping, picnicking, hiking, and relaxing in the heart of nature. Read more at North Toledo Bend State Park website

Pleasantly located on several small bluffs that extend over and into the Toledo Bend Reservoir, South Toledo Bend State Park offers a scenic, waterfront view from many vantage points.

While the reservoir is nationally recognized as a destination for bass fishing tournaments, visitors to the park also enjoy other outdoor recreational activities such as hiking, cycling, birding, camping and enjoying the many forms of wildlife in the area.

The site is located in Sabine Parish, just 30 minutes from Natchitoches and I-49, and six miles east of Many off LA 6 (formally the San Antonio Road). Fort Jesup is a reminder of a young nation's growing pains and a relic of Louisiana's rich international heritage.

In May 1963, land acquisitions for the reservoir began as a joint management project of Texas and Louisiana River Authorities.

Construction on the Toledo Bend Dam, spillway, and power plant, began in May of 1964.

The closure section of the earthen embankment and impoundment of water was begun in October 1966.

The power plant was completed and began operating in the early 1969. 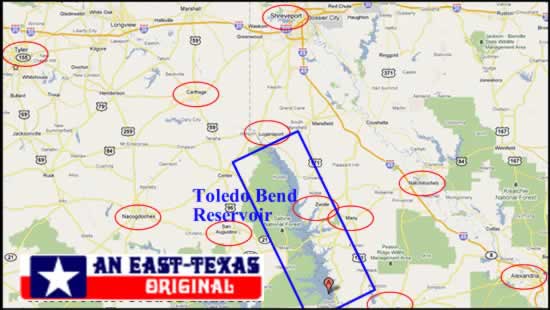 Texas communities close to the reservoir include St. Augustine, Carthage, Hemphill and Jasper. The largest city in Upper East Texas, Tyler, lies further to the west.

Photos from Around the Toledo Bend Area 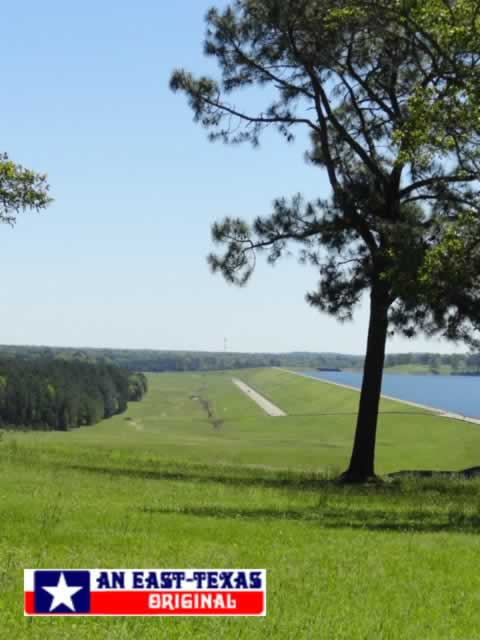