We love to visit Gladewater, just a quick drive north of Tyler on U.S. Highway 271, and only 13 miles west of Longview on Historic U.S. Highway 80 as shown on the map below. It is located in Gregg and Upshur counties.

It's a great place for exploring East Texas history, and is known for its large number of antique stores, antique malls, and festivals.

The population of Gladewater is 6,134 residents according to the 2020 Federal Census. It is assigned telephone Area Code 903, and the Gladewater Post Office uses Zip Code 75647.

The City of Gladewater is served by the Gladewater Independent School District.

Today, it is the Antique Capital of East Texas, and a Texas Main Street and a National Main Street city.

For more information, visit the website of the City of Gladewater.

Area communities include Gilmer and Mount Pleasant to the north, Hawkins, Big Sandy, Mineola and Grand Saline to the west, Kilgore and Henderson to the south, and Winona to the southwest.

Gladewater hosts a number of well known festivals including the following:

And antique shopping is always a popular activity for visitors and residents alike!

The Gladewater Historical Society was chartered as a non-profit educational association in 1987 to preserve and interpret the history of the Gladewater area.

Today, the Gladewater Museum is located in the building known as the Ellen Bauman Community Building. It was built in 1939 during the Art Deco Period. Doc Shepperd was the Gregg County Commissioner at the time of the building’s completion. The building was used for county offices and a library downstairs. The second floor was used by various community organizations for meetings and social gatherings. The library moved to a new home in 1973. Since that time, the building has been used by various community groups.

Lake Gladewater was constructed in 1952 to provide the citizens of Gladewater with an ample supply of water for future generations. Today, this pristine 6,950 acre-foot spring-fed lake is surrounded by beautiful homes and is also enjoyed by fishermen and boaters. The lake is located northwest of downtown.

The July 4th Boat Parade is held here and a fishing tournaments as well.

Read more about the Lake Gladewater at Texas Parks & Wildlife.

Long famous as "The Antique Capital of East Texas", today Gladewater continues to offer a variety of popular antique stores and malls, all within easy walking distance! Some are shown below ...

During February and March each year, the area is treated to millions of blooming daffodils at Helen Lee's Daffodil Gardens ... we have visited the gardens on multiple occasions, and highly recommend a trip there. It is physically located at 21600 CR 3103 outside of Gladewater.

The garden opens, depending on the weather, in mid-February and remains open through March or until the daffodils are no longer in bloom.

The garden is open during this time seven days a week from 10 a.m. to 4:00 p.m.  There is no charge for admission, but donations are accepted; we highly recommended making a donation to help insure this incredible garden continues for years to come.

The road through the gardens is dirt/gravel, and one-way, but an easy drive. One large parking lot is available in an area with massive areas of daffodils and ideal for walks and photography. A second parking area is located at the historic log cabin at Lake Josephine.

For road conditions in the gardens and predicted blooming schedule, contact the Mrs. Lee's Daffodil Gardens at 903.845.5780.

Gladewater, about 105 miles east of Dallas, was founded by the Texas and Pacific (T&P) Railway Company in 1873. In the late 19th century and early 20th century, the economy of the area was based mainly on timber and farming.

In late 1930, the first well drilled in the great East Texas Oil Field was completed, the Joiner Daisy Bradford No. 3 near Joinerville.

The discovery of oil near Gladewater in 1931 was the beginning of decades of economic growth based on the oil and gas industry.

During the 1970s, as oil resources began to be depleted, Gladewater transformed to a more diversified economy.

For more information on Gladewater, we recommend visiting these web sites ...

Map of Upper East Texas showing the location of Gladewater 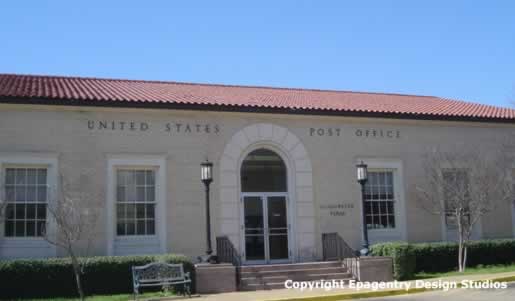