U.S. Highway 80 was an early transcontinental route, from Savanna, Georgia, to San Diego, California, covering a distance of 1,032 miles.

Most of the early route of the highway was along the Dixie Overland Highway.

The western legs of U.S. 80 from Dallas have been absorbed into newer Interstate and state highways in West Texas, New Mexico, Arizona and California.

It entered Texas from the East between Shreveport, Louisiana, and Waskom as a two-lane road.

Today, U.S. 80 runs 161 miles through East Texas, parallel to Interstate Highway I-20, before it ends in Dallas. Cities and communities on the route include:

Marshall is the first major city one enters on U.S. 80 after leaving Waskom. It is 150 miles east of Dallas and 40 miles west of Shreveport. U.S. Highway 59 runs north-south through Marshall.

Founded in 1841, Marshall is a major city in the East Texas economy, and a large supporter of the arts community and historical preservation. It is often called the "Cultural Capital of East Texas".

Marshall is well known for its "Wonderland of Lights," one of the largest light festivals in the country when lit during the Christmas season, and the original and largest Christmas festival in Texas.

Each evening, visitors can enjoy more than a million lights located in hundreds of displays that showcase Marshall’s historic town square and the Street of Dreams.

Marshall has more than 100 historical markers and medallions, such as the T&P Depot marker , with several sites listed on the National Register of Historic Places.

Many of Marshall's Victorian homes have been restored, and several function as B&Bs. Also fully restored is the Harrison County Courthouse.

Other popular attractions near the courthouse include the Michelson Museum which showcases the work of Russian-American artist Leo Michelson, and the Visual Arts Center where visitors can watch artists practice their crafts, and shop for paintings.

Heading west from Marshall, historic U.S. Highway 80 passes through Hallsville and then into the City of Longview.

U.S. Highway 259 traverses Longview in a north-south alignment, and Loop 281 provides additional traffic flow around the north part of the city.

Its economy is strong and diverse, and the oil and gas industry continues to play a major role in economic development. Longview is the county seat of Gregg County.

Although forged from a rich history in the oil and gas industry, Longview has a strong health care industry, manufacturing and technology.

In 2014, Forbes magazine ranked Longview as the sixth fastest-growing small city in the US. Residents of Longview enjoy an attractive quality of life with a wide range of educational, cultural, and recreational opportunities. Longview is certified as a Texas Urban Main Street City, and also is designated as a Certified Texas Retirement Community.

The annual Great Texas Balloon Race has earned Longview the official designation as "The Balloon Capital of Texas" by the Governor of Texas. 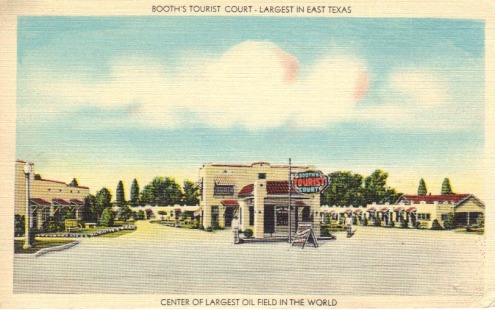 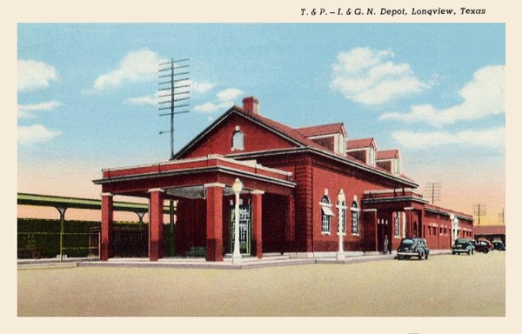 Gladewater is located 13 miles west of Longview on U.S. 80, and about 105 miles east of Dallas.

The city was founded by the Texas and Pacific (T&P) Railway Company in 1873.

In the late 19th century and early 20th century, the economy of the area was based mainly on timber and farming.

In late 1930, the first well drilled in the great East Texas Oil Field was completed, the Joiner Daisy Bradford No. 3 near Joinerville.

The discovery of oil near Gladewater in 1931 was the beginning of decades of economic growth based on the oil and gas industry.

During the 1970s, as oil resources began to be depleted, Gladewater transformed to a more diversified economy.

Today, Gladewater is a great place for exploring East Texas history, and is known for its large number of antique stores, antique malls, and festivals.

The population of Gladewater is about 6,300 residents. It is assigned telephone Area Code 903, and the Gladewater Post Offices uses Zip Code 75767.

Gladewater is known as the Antique Capital of East Texas, and is designated a Texas Main Street and a National Main Street city. 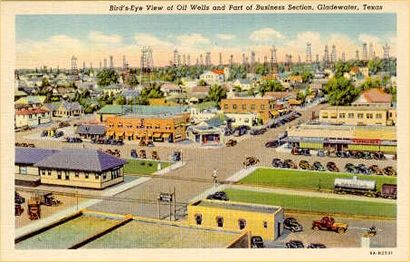 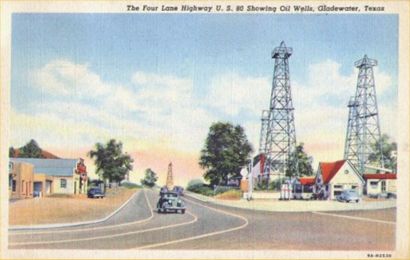 Leaving Gladewater, U.S. 80 is routed through the small communities of Big Sandy and Hawkins, and then into Mineola at the intersection of U.S. Highway 69 and Highway 80 in Wood County. Its population is about 5,000 residents. Elevation is 417 feet above sea level.

Mineola has sometimes been called “the forks of the river,” due to its proximity to the Sabine River, Lake Fork Creek, Big Sandy and Little Sandy creeks.

Water is important in any community, and Mineola's most famous public well was located at the intersection of U.S. Highway 80 and Johnson Street. Mineola became known for the mineral water found in it, which was detected during the drilling for salt in the late 1800s after the salt dome in Grand Saline was discovered. The well was thought to have therapeutic, healing properties to combat issues such as rheumatism, gout and diabetes, and the city shipped its mineral water across the country. 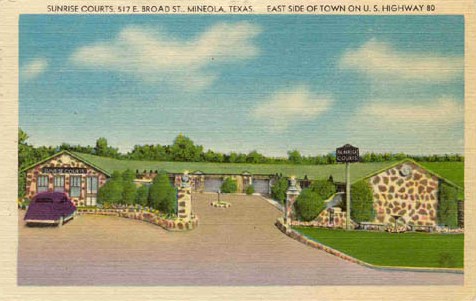 Located at the intersection of Historic U.S. Highway 80, Texas Highway 17, and Texas Highway 110 is the City of Grand Saline in Van Zandt County. The city lies approximately an hour east of Dallas and 15 miles north off Interstate 20. Its population is about 3,000 residents. Elevation is 400 feet above sea level.

The name of Grand Saline is based on the large salt deposits located in the area. It is often called "The Salt Capital of Texas".

About 15 miles to the southeast of Grand Saline is Canton, home of the world famous First Monday Trade Days.

In addition to these area attractions, the popular Salt Palace and Visitors Center contains displays, exhibits and videos about the history and operation of the salt industry.

The original Salt Palace was built for the 1936 Texas Centennial, and the structure has been rebuilt since that time. Today, it remains the only building in North America made of pure rock salt.

It also contains mementos from hometown favorite Chris Tomlin, one of the world’s most influential Christian singer-songwriter, and fellow native Wiley Post, the first pilot to fly solo around the world.

Since the Salt Palace is built from translucent blocks of sodium chloride, the mineral compound commonly known as "salt", many visitors like to "lick the building"!

Read more about current happenings in Grand Saline at the Salt Palace Museum on Facebook. 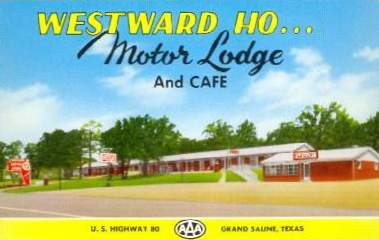 Founded in 1873, Wills Point gets its name from an early American settler, William Wills, who arrived in the area around 1848. In 1856 Wills purchased from the state 320 acres on the Dallas-Shreveport Road, built corrals, kept supplies, and furnished his log cabin as a resting place for travelers.

The city today is located about 50 miles east of Dallas, in northwestern Van Zandt County.

The downtown streets were laid with red bricks upon packed sand in the 1920s by locals and remain in use. Downtown Wills Point has many of its original buildings that are over one hundred years old including the Wills cabin, a drug store, a dry good store, and a law office. Governor George W. Bush officially named Wills Point the Bluebird Capital of Texas in 1995. 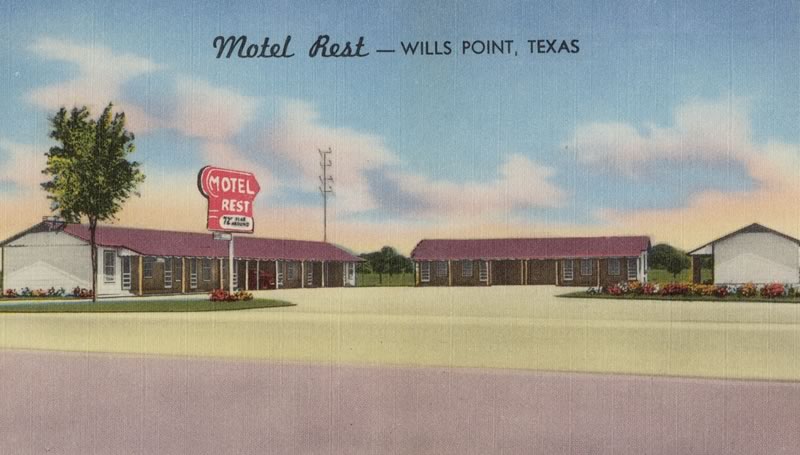 Westward from Wills Point to Dallas on U.S. 80

As U.S. 80 leaves Wills Point westbound, it travels through Terrell, Forney, Mesquite, and into Dallas.

And be sure to stop at the Buc-ee's Travel Center #36 just west of Terrell.